Sixty-five per cent of pupils achieved the government’s “expected standard” in reading, writing and maths in this year’s key stage 2 SATs, up from 64 per cent last year, according to interim results published by the government.

The results show that the proportion of pupils reaching a scaled score of 100 or more rose in every discipline.

In reading, 73 per cent achieved the standard, down from 75 per cent last year, while 79 per cent met the standard in maths, up from 76 per cent.

In spelling, punctuation and grammar tests, 78 per cent of pupils met the expected standard, the same as in 2018, and the proportion meeting the standard in writing was 78 per cent, also unchanged from 2018.

However, officials warned, changes to assessment frameworks for writing two years ago mean that neither the overall results for reading, writing and maths, nor the results specifically for writing, are comparable to those from 2017 or before.

The government also published the marks pupils needed for the 2019 key stage 2 tests to achieve its “expected” scores. You can read about them here. 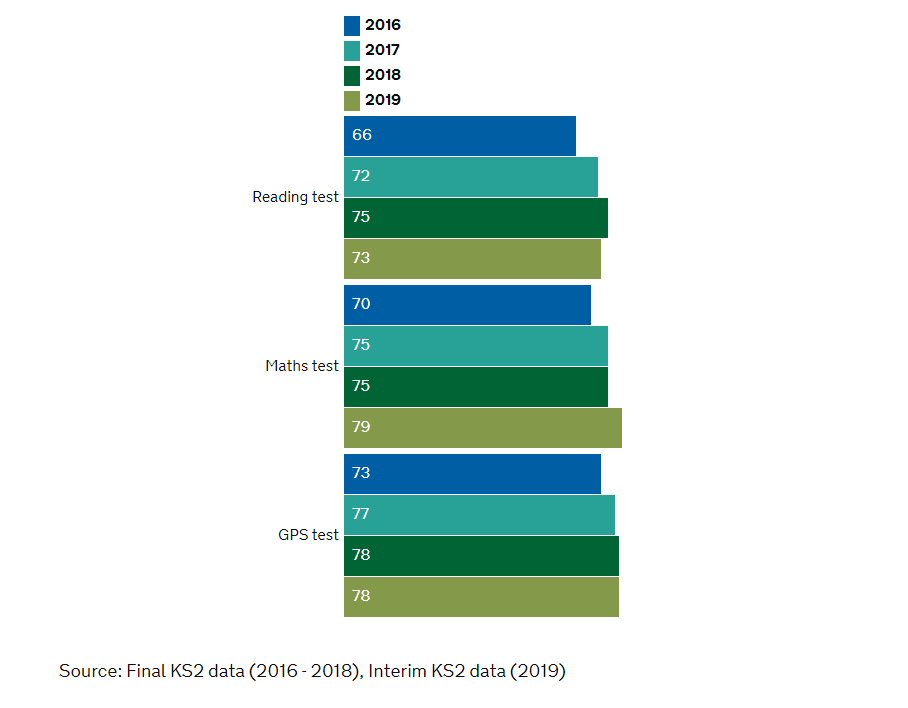 Nick Gibb, the schools minister, said the results “show the majority of pupils are leaving primary school ready to deal with the challenges of secondary school”.

“The pupils who performed well in these tests will have demonstrated sophisticated grammatical skills like using the subjunctive, the ability to divide fractions and mastery of complex spellings.

“We reformed these tests in 2016 to make sure they assessed schools’ performance in equipping pupils to understand the new, improved primary curriculum. These skills will give them the chance to make the most of their potential – this is at the heart of the reforms we’ve introduced across the education system since 2010.

“It’s testament to the hard work and dedication of teachers that we have seen results rising over time despite the bar of expectation having been raised.”